My name is Stefan Fransson, and I have my studio in Stockholm, Sweden.
I work in different medias, as painting, sculpture and collage.
As an artist it is a great thing, to find a tool or a technique that suits the sort of creativity, that one has.
Personally I do enjoy to work with collages.
The reason is that I like to mix and play around with colors and shapes.
As I am very interested in composition, the collage technique, gives me the chance to move around the colors and shapes in the images, until new pictures appears.
For the past few years, I have worked with my creations in the computer.This has given me the chance to 'build in' my paintings and 3d works, as colors and shapes into new images. 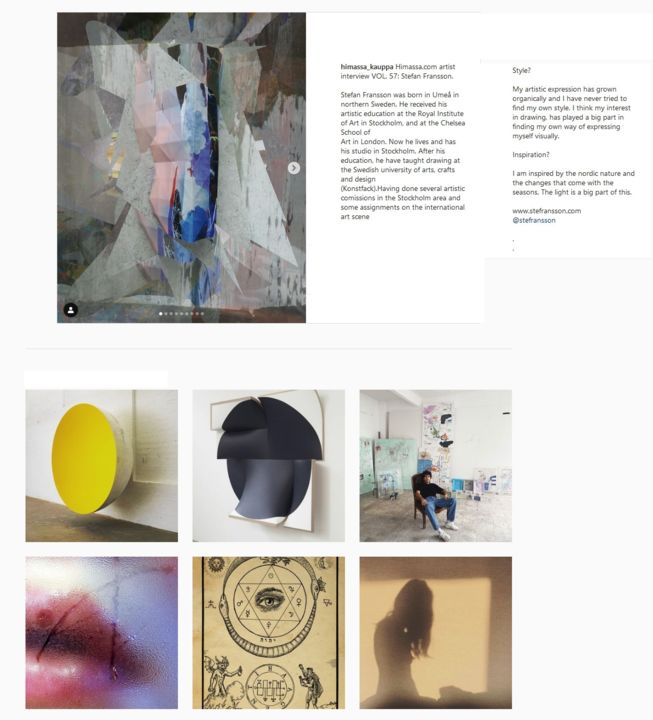 My works in the Circle Quarterly Art Review Issue 5 The artwork 'Plant' in the spring edition of Artmajeur Magazine. Feutered issue and an essay written by Deborah Kuan,New York...

Art, that ever-desirous creature, has a long history of trying to climb into nature's warm, inviting bed. But in doing so, it has tended to favor a rather myopic vision of nature as green, vital, rich, and perhaps most befuddling, maternal. It takes a natural disaster—perhaps volcanic ash obscuring the airspace over Europe—to remind us from time to time, however, that Mother Nature is a largely indifferent mom, given to explosive outbursts and tectonic mood shifts, who has no interest whatsoever in nurturing us. This may be why those cutaway illustrations of the Earth—which show a quarter of the planet sliced out to expose its composite layers—seem, when one first sees them, somehow subversive. They provide a glimpse, which would otherwise be impossible, into the rocky, molten, inhospitable depths beneath the natural world we know. Artists who deal with themes of physical science and the cosmos in their work expose the narrowness of a human-centric subjectivity while, at the same time, tap into the sheer wonder of life at all—and the consciousness to ponder it—against the backdrop of the infinite universe.

Lisha Bai creates strikingly seductive abstract sculptures, columns, and two-dimensional pieces in plexiglass using colored and black sand. In her plexiglass works, large sweeps and swirls of blue, purple, and pink sand against a black sand backdrop suggest interstellar spaces or distant galaxies. More recently, she has moved away from using the plexiglass as a box container and created free-standing black sand and resin columns with smooth sides and open tops, which remove the barrier between viewer and artwork. The result is four lusciously textural sculptures that contrast restraint and abandon, control and freedom, art and nature, in the most minimal and elegant of ways. Like Stonehenge or ancient stone circles, they radiate a mute, ineffable power that is rooted both in the prehistoric and the futuristic, the earthly and the cosmological.

Hilary Harnischfeger works with paper, water, ink, chunks of plaster, glass, quartz, and crystal shards to create painstakingly cut and layered bas-reliefs and small-scale sculptures that evoke geological processes. Portrait and Patternist 3 both of which deploy a subtle pastel palette, suggest rock growth and accumulation, as well as the blanching, chiseling, and wearing away of such surfaces over great stretches of time. The bas-reliefs' intricacy is beguilingly rich, compelling the viewer to want to look ever closer at, or run his or her fingers, over the nicks, slices, dents, protrusions, and valleys that comprise their surfaces. Harnischfeger ventures into more anthropological territory with Lucy, a lumpy, hunched, abstracted figure made of paper, plaster, glass, ink, and river quartz, which references the famous skeleton. Resisting easy classification, Lucy is a work of intriguing ambiguity, straddling the line between the natural and the made, the human and the inorganic.

Letha Wilson uses photography in sculptural artworks to investigate our complicated relationship to our natural world. Implicit in these works is the argument that two-dimensional images of nature are frustratingly inadequate as responses to the impulse that inspires them. Granite Tumbler depicts a flat rubber strip looping out of a photograph of a cliff wall and returning to the back of the framed picture. It suggests the natural cycling and recycling of inorganic materials as well as a thwarted desire to engage an immutable, indifferent mountain in a human way. In a similar vein, her extrusion pieces are attempts to interact with nature or with memories of being in nature by alienating those experiences, not by romanticizing them. Wilson takes the silhouettes of figures in photographs—for instance, her father—and renders them three-dimensional with innumerable white polystyrene cut-outs of their shapes that extrude either into other figures in photographs—for instance, a Joshua tree—or onto the gallery floor. The resulting photosculptures are strange, otherworldly artworks, evoking associations to futuristic time or space travel, that comment on photography's uniquely vexing ability both to imitate reality and to fall horribly short of it.

Swedish artist Stefan Fransson makes light mesh metal sculptures and abstract digital collages out of photographs, his prints, and other images. Flakes, an installation of mobiles and mesh sculptures that protrude from the wall, is a medley of light, whimsical parts, which could be snowflakes, clouds, gases, leaves, or other natural formations that populate our atmosphere. Fransson's collages express a similar interest in depicting natural phenomenon exuberantly. "Land" layers jagged shapes and slices of color in a composition that suggests the beauty of sedimentary overlap and accumulation. In The Change, this sedimentary theme is rendered as a large, biomorphic shape that looms inert, simply a part of everything, over the horizon of a nameless city.

Debora Kuan is a poet, writer, and art critic who has written for Artforum, Art in America, Paper Monument, and other publications. Her first collection of poems, XING, is forthcoming from Saturnalia Books in 2012. Currently a fellow at The Writers' Institute at CUNY. 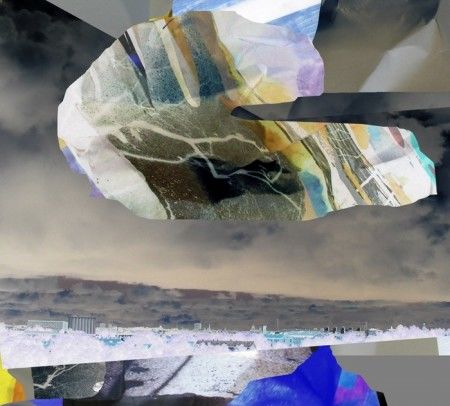 Artist of the month at Artist.de.Article written by Dr Stefanie Lucci.Publiched 17/8 2010.

Stefan Fransson
from Sweden
*1955, lives and works in Stockholm, Sweden

The compositions of Stefan Fransson seem to be comprising more than only the known dimensions of time and space. They show a complexity beyond the ordinary optical experience. An undefined vastness pervades these picture-worlds which seem to be lying in an infinity barely comprehensible with our senses. It is impossible to identify a beginning and an ending. These are complex arrangements, in which Fransson composes endless layers of pictoral fragments like collages on top and underneath each other translucent diaphane-like. It’s almost as if these worlds would be weightless - floating.

Some elements appear to be familiar, like flashes of memories, mingling with others. Other elements stay strange in their abstraction.
In the light of these suggestive permeations of picure elements, Franssons worlds breach paradigms in which linear fabrics of cause and effect are represented. Much more in his compositions, natural scientific and philosophical questions in which associations of networking are a basic principle are hinted. By this Stefan Fransson seems to succeed in building bridges between art and science, because his worlds seem to implement these theories visually.
Artist information
More art by this artist 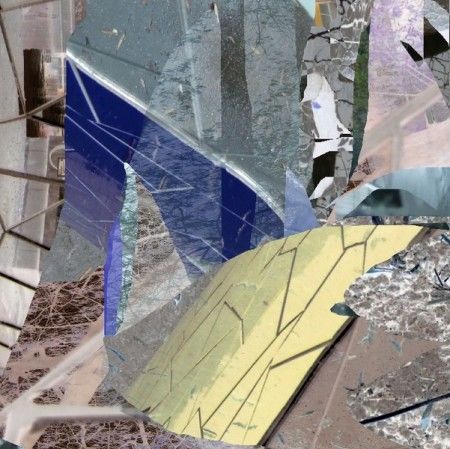